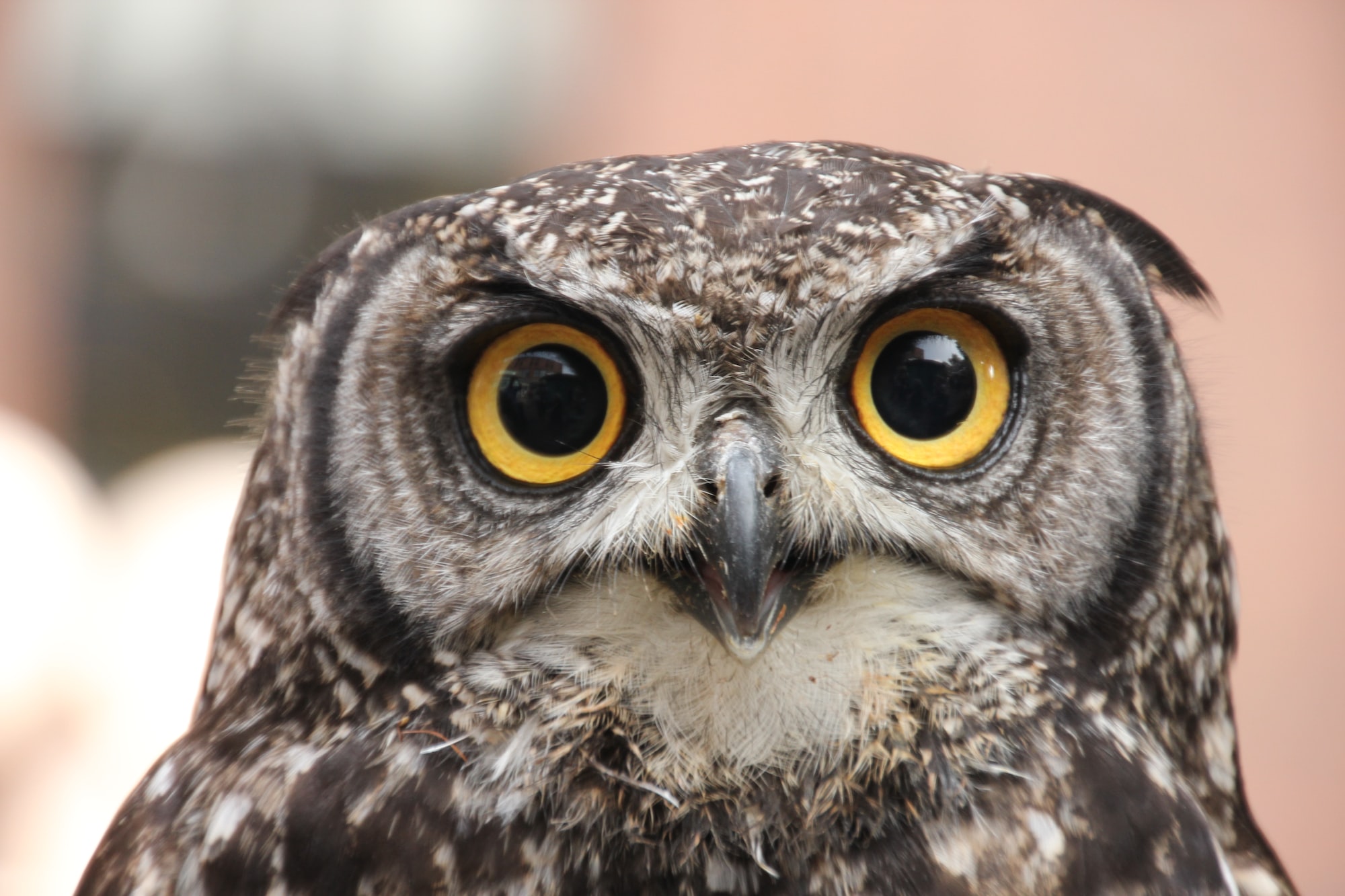 To kill an owl is to gain victory over Satan.

So kill an owl instead.

The sky was cloudy, the morning sun too tired from the night before to poke its head through all that wispy thickness. The breeze came in light puffs, shadows of a broken promise. The air was wrapped placidly with a gauze of unpleasant warmth and humidity.

And there was me. Purposeless. Scared. Thoughts of Covid-19 flying in my mind like wild bullets. The number of infected is rising. We’ve been forced home. What if this thing doesn’t end? Are we really at the end of days?

Then I saw this bird. A dark wooden brown, with freckles of some lighter colour. White or brown. Its underside was a milky brown, like Cowbell tea. It stood, almost as purposeless as me, under rows of clothes resting on a web of hanging lines.

I got closer, taking soft tentative steps. I didn’t want it to get the wrong impression. After all, I’m a friend. I have always been. I lifted my arms, very slowly, into the air.

“Hey birdie”, I said. “I’m a friend. I won’t hurt you. I promise.”
I whistled, tried different tunes. Jumped in and out of octaves. All in the hopes that I would accidentally speak its language. It moved away anyways.

Then something struck me. Like the sting of my mother’s slap. The bird. It didn’t fly.

I turned. Moved closer. The bird hobbled away in a flap of wings, and stuttering steps.

I asked myself, Is it wounded? A fracture perhaps? Why does it move like a…
It dawned on me. The epiphany as soft and jarring as a blanket of rain. The bird moved like a novice. I could feel my eyes moisten with affection. It was a bird-child.

But you’re so big! Big for a baby. Bigger than some adult birds.

It must be a bird of prey, I concluded from its curved beak and baby talons. I decided to take a few photo-shots.

The bird-child tensed. Lowering into a crouch, it opened its beak and lifted its wings an inch or two away from its body.

I leaped back, my heart pulsating, my mind replete with thoughts of gratitude that it had threatened and not acted.

I still wanted to get that picture so bad. So I skirted the bird, took a few shots from a distance, even had to poke my hand through the branches of a miserable Yellow Bush flower. The photos were disappointing.

I needed a better view.

So I shooed it out. It hobbled away, finally resting in a recess between two pillars. This proved to be a better vantage point. So I took a good number of shots, crammed behind a pillar, my arm stretching out to just the length that would take a close-up picture without actually getting close-up.

My heart waltzed. My face was creamed with smiles. The photos I had taken were splendid. The eyes of the bird-child were like small black buttons. Shiny, and innocent.

I walked back into the house, whispering a thank you to the bird-child. I had almost walked into my room when I stopped and turned into the dining.

“Look at this,” I said, giving the phone to my dad.

My heart perspired the same expectations my smiles requested. I pruned my ears, waiting to hear “nice photo', “I didn’t know you could photograph like this”, “wow, the bird is beautiful”.

Dad perked up. “Where did you get this?” He asked.

“I took it.” I still had a smile hanging, like a pendant, on my face.

“I know you took it. Did you get it from this house?”

I saw his face, his eyes. That look, the wrinkles on his face, I had seen it before.

I said “Yes”, expending the last pleasant energy, just as I realized what was ticking in his bald head.

The chair croaked against the hard tile, as he stood up with a righteous urgency. Soon, there was a flurry of activity. My mum was on me. “What’s that?” she asked.

“This is an owl na”, she said, scrolling through the pictures.

“No, it’s not,” I argued with a beautiful combo of vehemence, urgency, and ignorance. “That’s a baby falcon.” I spat.

Fortunately for mum, she had a visitor, one I wish to never set foot in our house again. Mum showed her the picture.

My heart was pounding faster now.  I could feel the taste of guilt and remorse at the tongue of my heart.

I could feel my heart sinking.

I knew I could delay no more.

An idea slipped into my head. My fingers ran over the keyboard of my phone as I moved to answer dad. The network was proving too poor. Not now, I pleaded.

“Come and show me where you found that thing.” He said.

I thought to mislead him. Take him to a different location. But he hovered round the general locale of where the bird-child nested. This was his house after all. And my picture had given him more than the cuteness, or in his case, the uncuteness of a bird.

So, I looked into the wrong pillar instead.

“It was here before,” I said, feigning surprise.

Just then, another man walked in.

“Ogini?” he asked my father.

“Okwa ikwikwii nwa m chotara”, he replied, still flinging his eyes about. It is the owl my child found.

The visitor, without speaking further, joined the hunt.

My brother began walking forward. With each step he took, the flame of my spirits wilted. Until it winked out.

I walked away. A wet blanket of remorse wrapped itself around my heart, and squeezed, suffocating it. Drowning me.

“Chere, let me do this thing.” I heard the visitor-turned-hunter say.

From the periphery of my vision, I caught him move closer to the bird. Heard more thuds ---bricks making an impact. I felt pricks of pain grow inside me, one by one until they became a chorus.

Mum turned to me as I came inside.

“Mimi, most of the things here aren’t as they seem.” She said.

Her voice was soft. Ripe with just the right amount of indulgent sympathy, and the conviction of being right.

Both my father and the visitor were priests. And they had suffered not a witch to live, executing its old-testament style. Perhaps, they would have carried the limp body of the bird in a triumphant march, if Covid-19 weren’t making a much better show.

Just then, the results of the search I had made, moments before the execution, came in. Turns out it was an owl after all.

A demon. A witch. Or just a bird. A noble bird.

Miracle Edoziem is a writer, and a student who loves to read.